Dressage Bit Contact: The Dreaded Break at the 3rd Vertebrae and How to Resolve it

December 30, 2014
Schooling challenges: Inheriting a horse that has been trained incorrectly and breaks at the 3rd vertebrae - It is much easier to work a horse correctly from the beginning than to have to 'fix' an issue later on as we all know. Our latest equine protegee, this lovely stallion - has received minimal training and but has shown at Training Level in Canada ~ however somewhere along the line he was ridden incorrectly and allowed to hide behind the vertical. Though he scored well the judges comments noted inconsistent contact.

As he does not have an excessively long neck this is an interesting achievement. How to resolve it?

We'll begin by working him a little in front or above the bit, sending him forward and setting a good rhythm from the get go. Then we'll encourage him to take the reins and stretch over his back and out down in front, without putting his head too low i.e. not below the knee - he must learn to take the contact and to take his part of it consistently. This requires a very good seat from the rider and is best done first at the working trot posting. He is also being worked in shoulder fore, shoulder in and counter flexed to the outside to supple his neck and his sacroiliac.

As a stallion his neck is large with a big crest and a lot of lower neck development that we must 'remove' and put on to the top line where it belongs. But that neck muscle must emanate from the wither forward as he progresses, not from the top of the neck backward, or we will see the 'ugly' sausage muscle that says loud and clear, this horse has been ridden with too much hand and from front to back instead of the other way around. 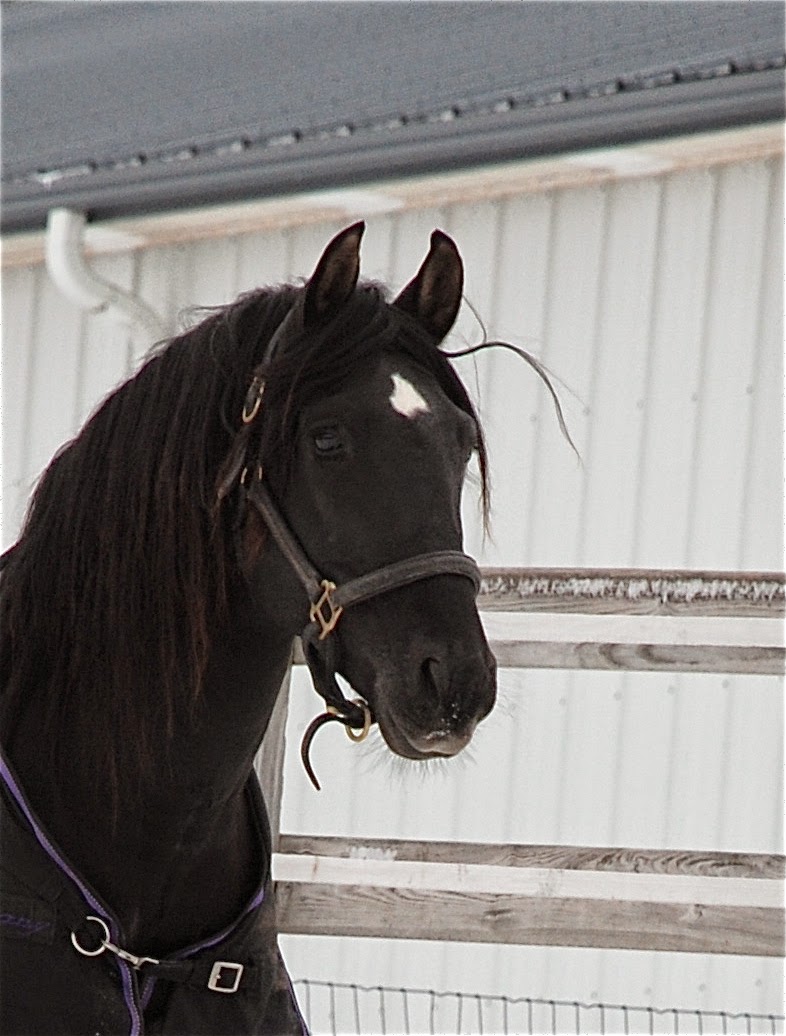 Interestingly this horse does not exhibit the "broken at the 3rd vertebrae neck" in the canter.  This is because his canter is easily his best gait, he likes to be round and forward. I also believe it is because this gait has not been overly schooled, historically. We will use his canter to 'show him the way forward' with frequent correct transitions. This means we must make him strong enough and balanced enough ( hence the lateral work), to make an upward transition without needing to throw his head above the bit and make a downward transition without falling on his front end. This is achieved by correct timing of the aids, an open and not a driving seat but a 'still' seat during transitions and a quick move to posting on the downward transition and re-balancing through the half halt before, during and after the transitions.

The horse also lacks gaskin development indicating that he is not carrying himself properly behind, and he is pushing forward rather than lifting forward. At his stage of development he is built higher behind than in the front, a common issue with Andalusians. In fact the ANCCE breed inspectors ( the much revered and appreciated Spanish Andalusian registry) actually prefer a higher croup than wither. As a dressage rider we know we are fighting a 'downhill' battle with this type of conformation. But again, correct work will help. As the horse learns to take his own weight backward and to lift correctly,  through frequent transitions, lateral work and counter flexion in all gaits, his sacroiliac region will strengthen and his ability to carry will improve.

It is essential that the horse not be overworked during this period. The work must be kind and not overly enthusiastic or the horse will become tired. This is hard work for them. Thankfully this horse has good hocks and no 'wobbling' in his fetlock or hock joints. That would require a different approach. We use frequent walk breaks in an active but uncluttered or unfettered walk i.e. not interfering all the time as a rider but just allowing the horse to move forward, are beneficial.  It is important that even when walking on a long rein the horse be required to be 'out there' in front, taking the rein contact softly as he covers the ground, relaxed across his top line.

How will you know when you are back on the right track and can move on in his work? The wither will essentially 'pop'. You will go to re-stick ( re-measure with a measuring hand stick) your horse and find he has grown an inch or two. His gaskin will be evenly developed and bulging nicely when the horse is viewed from behind. Look for the horse to show even amounts of bulge on each hind leg. Any difference is an indicator of incorrect work or unsoundness. And the neck will be soft, the muscles rolling and rippling as he works. The sacroiliac will be soft and supple and the horse will easily bend around each of your legs as requested instead of 'blowing off' your leg, avoiding bend, stiffening against the bend, shoving shoulder out of alignment etc.  In many years of buying both young and proven international Grand Prix horses, that look from behind tells you everything. Don't get me started on that topic.

When working your horse through this transition to correct work be aware that if you are 100% certain you are riding the horse correctly and he still cannot access the correct contact you may need to have a chiropractic exam. So often young horses are tied up then they panic or struggle for one reason or another,  and pull vertebrae in the neck. This is a reason we never tie foals. My pet hate is the cross tied horse for the farrier.. again, don't get me started. It is also a reason we don't use cross ties, but if you must, be sure they are velcro breakaways. The emergency snaps are not good. I have seen them hit a horse in the face, or pull off at the wall and be dragged behind and around the horse during his panic, I have also known one friend to lose fingers trying to unsnap them.

Will update as this young lad with so much potential progresses. As Greta Grillo, German dressage team rider once said, " He didn't ask to be in my yard. Taking care over his training is the very least I can do." Ditto here at WVH. Every horse is an individual and so is every rider, and they must be treated as such with much respect.

Popular posts from this blog

October 12, 2018
The new shortened version of the Grand Prix dressage test will be showcased at Olympia, London, UK, this December. The new test has not been well received in the dressage community and there are many good reasons why.   Are You All In With The New Test? ( Photo: Brittany Fraser and All In) The FEI seems to have gone for a shorter test, thinking this means more spectator interest which is ridiculous as the reduction of the test by 2 minutes per test will not mean more viewers. What it will do is to reward the horses at the very top of the sport already, that have crowned their talents with excellent 3 'p's movements.  The new test offers lots of activity early in on the test which means no time to allow the horse and rider to settle into the test. While much of it feels more like an Intermediate test than a Grand Prix, the missing elements such as the zig zags would have Wolfgang Niggli turning in his grave. The rein back also missing will have many clas
Post a Comment
Read more

January 27, 2013
The fun to do, fun to train, dressage flying change is truly like dancing with your horse. Unfortunately all too often issues arise during training that make them less than perfect. Major issues which are very common include swinging of the hindquarters ( which will cause lots of issues with tempi changes so be warned), changes that are late behind, swishing tails during the change, changes that are not forward, where the croup is high and the horse shows stiffness behind. In the latter event the horse will cover very little ground as he is not 'flying' through the change. Other issues that occur in training are running off after the change, bucking, coming above the bridle and the riders hand. Do not despair! There is some discussion as to which leg should push hardest during the change and to whether there should be a lightening of the seat during the movement. From my experience and training, lightening the seat is to be avoided. Stay straight, do not collapse a hip and
4 comments
Read more

Nikki
I am proud to say I am a proven Grand Prix dressage trainer/competitor and am still a work in progress. As a European I am very happy to have competed successfully in Europe and enjoyed GP scores of over 72%. Over the years I have been blessed to train with several dressage Olympians and have sucked up knowledge as any dressage aficionado would do. I read extensively and am also a published writer, photographer and artist. I have been published worldwide including by the much revered The Chronicle of The Horse in the USA. Together with my husband Paul, who is also an accomplished Grand Prix rider and naturally the love of my life,my FEI Swiss coach Greta Kemmer, and long time student and now trainer in her own right, Tina Hammond, I provide clinics and dressage lessons in the USA and Europe. Since 1993 I have operated a small warmblood and baroque breeding program with my husband at our farm in the Hudson Valley and now in Catskill Mountains of New York. Never a dull day here! Look for my latest book Road Map to Grand Prix Dressage release date Spring 2018!